The purpose of this blog is to reduce your concern by arming you with some knowledge on what drenches are ok, which ones have potential adverse effects on dung feeding organisms, and, how a mindful approach using drenches actually works until beetle populations build sufficiently for drench use to end as a standard practice.

I provide insight from a farmer who is a regular user of drenches, despite a persisting healthy population of long-established dung beetles and new dung beetle varieties at year 5 post release.

Colleagues Bernard Doube and Tim Marshall1 summarised information from Clarke Scholtz and others2 to create a table of the main pharmaceutical chemicals used to drench livestock. It’s worth a look at for reference. If you don’t know and want to know what chemical groups and active ingredients you are using then look them up on https://www.msdvetmanual.com/ . This site separates the chemical groups into their active ingredients. If you struggle with finding the chemical or active ingredients you are working with then check with your vet or contact us directly.

Back to the summary table.  You will note there are some drenches like Levamisole® with residual active ingredients that are passed in urine and therefore of no concern to dung beetles. However, there are a multitude of chemical groups that the authors have listed to show likely or highly likely impacts on dung beetles. The all-in-one or endectocide ‘mectins’ are regarded as the nasty bunch, with drenches like IVOMEC® Pour-On (ivermectin), IVOMEC® EPRINEX® Pour-On (eprinomectin), and Dectomax® Pour-On being associated with the suppression of insects in the dung of treated livestock. In contrast, studies have shown that of the endectocides tested Moxidectins have the least likely effect on insects associated with dung on pasture.  Cydectin®, marketed as dung beetle-friendly, is 64 times less toxic to dung beetle larvae than avermectins. Neither of these findings mean there are NO negative impacts with some varieties of dung beetles like Geotrupes spiniger being more “sensitive” than others, even to moxidectin. They are just the best of the bad lot, so to speak.

It is important to note here that ‘Highly likely’ does not mean complete mortality and complete collapse of your beetle population. Why? Two key reasons: there will always be “safe” dung present that is not containing residual chemicals when drenching is not being carried out, or when only a proportion of stock are drenched. Adults and young feeding on this will maintain the survivorship of the population even if a proportion of the population is knocked back by some beetles and young exposed to contaminated dung; The proportion of adults or young exposed to chemicals is itself proportional to the amount of stock drenched. And the amount of mortality incurred is dependent on active ingredient and its concentration in the voided manure with ‘mectins’ typically exert most of their impact on dung beetles for a period of 2-3 weeks post drenching.  Conversely, lowest impact as the chemical’s toxicity fades in the animal. However, note that some active ingredients have a long tail which means something like persistence of residual active ingredients can last for months in the animal post treatment.

Best Practice: Firstly, when utilising drenches adopt a mindful approach of their potential impacts on your dung beetle investment especially in the first few years post dung beetle release when the beetle numbers are growing each active season.  Also know that Pasture management helps control parasite levels, and dung beetles can help you manage your pastures.

Thirdly, rather than drench all the animals regardless of many not showing any signs of excessive worm burden, identify the shedders and treat only them with chemicals when the animals are in the yard. Doing so will leave the majority of the mob with low but tolerable worm burdens providing them with the immunological vigour to maintain immunity that controls the worms naturally.  If you erode the animals’ immunity then susceptibility to worm infestations among the mob increases and dependency on drench treatments is established.  Most importantly, treating as fewer animals as possible will significantly reduce the evolutionary pressure among the parasites to develop the dreaded resistance!

If you insist on drenching the entire mob of wieners or two-toother’s or new stock because that’s how your father did it then Read David Kidd’s regime.  In any drench scenario hold those animals in paddocks set apart from your main herd(s) and/or well away from your establishing population of beetles.

Insight: David Kidd, 2014 Young farmer of the Year (www.stuff.co.nz/business/farming/…/Young-farmer-of-the-year-betters-dads-efforts ). David has had dung beetles on his farm since the late 1990’s and introduced some of the new varieties approximately 5 years ago. Virtually all cow pats have dung beetle presence he uses drenches regularly. Here’s what David uses and his drenching regime: “I typically use Saturn (abamectin/levamisole) or Eclipse (same actives). For older animals I revert to Cydectin typically. I try and drench young cattle every 8-10 weeks, and older cattle at 10 – 16 week intervals. Older being older than 20mths. I stagger drenching across the property, with a view to doing all the young stock over a 2 week period then older stock after that”.

I am not posting David’s insight because I condone a blitzkrieg-style drenching regime ?, I don’t, its more to demonstrate that using drenches does not necessarily mean doom to your dung beetle population. David has a strategic approach and it appears to work for him and have a healthy population of dung beetles. Once the new varieties of dung beetles bulk up and complete a year-round beetle presence on the farm, David will no longer need to drench except if exceptional instances arise when its needed on some individuals. 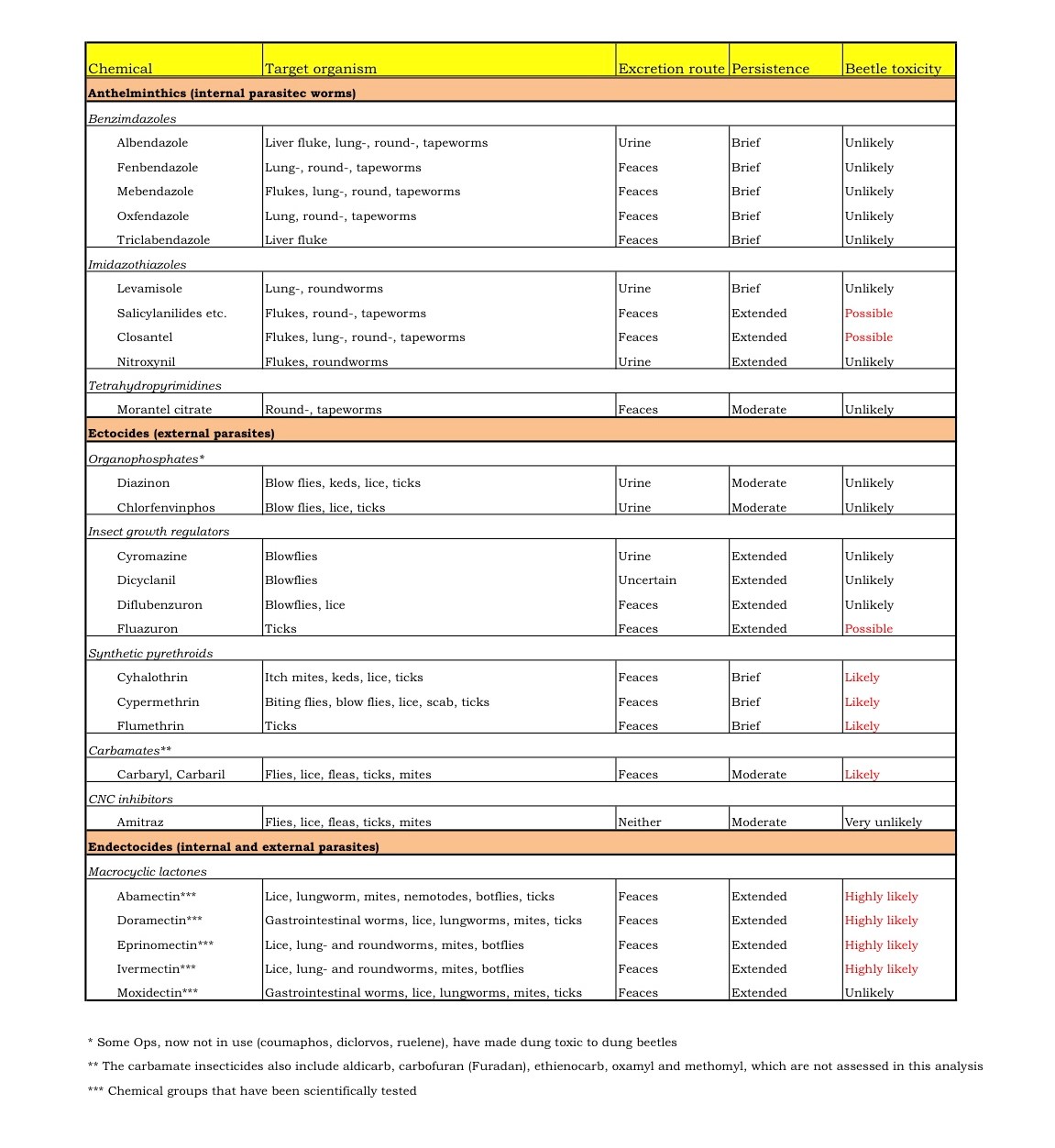