This article was written by  Tessa Nicholson for New Zealand Winegrower Magazine.

What is less than two centimetres long, loves to work during winter, has a hunger for animal poo and could be handy for grape growers?

No, it’s not the start of a bad joke, it’s a serious question, one that was answered at the Organic Winegrowing Conference.

The answer by the way is Bubas bison – a dung beetle brought into New Zealand by Dr Shaun Forgie, co-founder of Dung Beetle Innovations.

Bubas bison is just one of around 7000 dung beetles who according to Forgie owe their existence to “playing around in excrement all around the world”.

Why is that important? Because by playing around in excrement, dung beetles provide a bio control that takes that dung deep into the soil, providing all important nutrients and breaking up the soil by providing airspace.

There is a plethora of scientific information that backs up just how ecologically important dung beetles are in the agricultural sense. They help with pasture productivity, plant nitrogen, add protein and develop microorganisms, increase soil health and improve water holding capacity among many other things. There are dung beetles on every continent (with the exception of Antarctica) all of them going about their daily task, never complaining about their shitty job conditions. There are three types of dung beetle, the rollers, which roll balls of dung many times their size away from the manure pat. There are dwellers, which live inside the dung itself and finally tunnelers which remove the dung from the surface and carry it up to a metre down into the soil.

It is the tunnelers that Forgie has brought into New Zealand, with the permission of the Environment Protection Authority, because New Zealand simply does not have any beetle that could be put to use on agricultural pastures. The only native dung beetles are tiny, flightless rollers that are confined to native forests, so no good on pastural land.

The way the beetles work is they are attracted to the smells emanating from fresh manure piles. They move in and then start tunneling balls of the manure down into the ground, time and time again. They lay an egg in each one of the microscopic balls, which then starts the life cycle again. 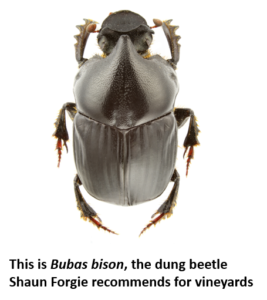 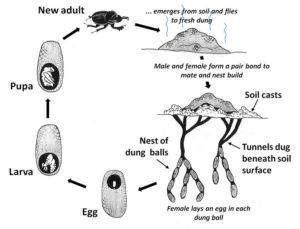 “That whole process can be about six to eight weeks,” Forgie explained. “So with those fast biomass dung beetles, you can get multiple overlapping generations all producing babies and burying manure rapidly. You get a hugely exponential increase in beetle abundance once you have put them in a particular place.”

Given placing sheep in vineyards is a unique New Zealand occurrence, Forgie believes there is the potential to utilise dung beetles to make the most of the poo. In particular Bubas bison, which is around 18mm in length, is a flying beetle and is active during the same months that the sheep are most commonly homed in vineyards – March to October.

“It is a specialist at winter time, when all the other beetles we have are hibernating. This one decides to start emerging around March and goes through until October. It is prolific at burying anything from cow manure to sheep poo. So if you have got sheep running around at that time of the year then you may as well utilise that nutrient resource in the form of manure by shoving it into the ground. It is another tool to try and improve soil health, sustainably.”

What’s more, Bubas bison enjoys the soil types that vines do, including clay and compact silts.

As for the cost, Forgie says they can provide dung beetles at a cost of between $10 and $40 a hectare, depending on which of the 11 beetles a customer prefers.

For the online article and related dung beetle topics head to https://www.ruralnewsgroup.co.nz/wine-grower/wg-general-news/putting-excrement-to-work

ask the aunties (or uncles in this case!)

At the recent Organic & Biodynamic Winegrowing Conference, Shaun was asked so many questions that the time allotted for the Q&A segment had to be doubled. Nevertheless, some questions were still unanswered. OWNZ’s coordinator Rebecca Reider followed up with five of our guest speakers to seek answers to the most popular questions remaining. We hope you enjoy these post event insights!

Below is an abbreviated version. For the full article of our follow up questions, check out the latest edition of our magazine Organic Matters (due out mid August 2019).

Q: Can you talk us through introducing dung beetles to our vineyard? How do you do it?

A: We have just developed a “winter beetle package”. This comprises an initial release of a colony of up to 400 Bubas bison. A second colony is recommended for release in year two to offset any potential for a two-year developmental phase underground rather than just one. This second colony, while highly recommended, isn’t mandatory. Once ordered, the first colony will be posted via Priority Courier Post and the RD network for 2-3 day shipment once livestock are added to the vineyard. Handfuls of beetles will then be tipped onto fresh sheep manure. Bigger piles comprising logs and pellets is optimal. Beetles will then distribute during a 30 minute flight window just after dusk and just before dawn each day to find fresh manure each day, for as long as stock are in the vineyards. This species is active until stock and dung leave or the end of their active season in late October – whichever comes first. These adults die or hibernate underground. Meanwhile their scores of babies are developing in balls of sheep poo deep underground, and will emerge as new adults from April onwards the following season. How warm and dry the autumn is determines what percentage of developing young will emerge in year one or do so in year two, hence a two-year release package. We understand that mass emergence is triggered by a break in the season with cold temperatures and moisture. If the autumn is a dry warm one, then a higher proportion of the young stay put underground as a survival strategy that has been hard-wired into their genes for at least 50 million years.

Q: How much does it cost, and are all local councils involved in their provision to landowners?

A: $2,000-$3000+GST. In our winter beetle package, the first colony is valued at $2000. The second colony in year two will cost $1000 and is offered at half price as an incentive to order it as a $3000 package. Some councils so far are focused on dung beetles for commercial livestock farms and their use in reducing erosion and surface flow of contaminated water, and improving soil health and water quality. In 2018, Marlborough District Council engaged in a limited subsidy scheme for the first 10 farmers to embrace dung beetles in the district. To this point I am not sure the council is aware that dung beetles in a viticulture environment is now a reality. With some encouragement by viticulture organisations and lobbyists, then the council could respond with some form of subsidy scheme. MDC is a progressive council which we like to work with.

Q: Do you think dung beetles in vineyards with sheep in winter would help soil compaction from machinery?

A: Yes, dramatically so. This species nests in a range of 60-90cm beneath the soil surface. Their tunnels, bioturbation of subsoils, deposition of organic carbon and nutrients from sheep manure, and improvements to soil macropores, biota, root penetration and structure, has been shown to be significant.

For the online Blog head to : https://www.organicwinenz.com/post/ask-the-aunties-or-uncles-in-this-case