A farmer in Matamata released beetles only 2 years ago yet has already found evidence of them at work.  The picture below shows pushed up soil amidst a smashed-up dung pat – extremely positive evidence of dung beetle activity, most likely by Spiniger.

Other finds in recent months include a Hawke’s Bay farmer finding a dung beetle over a kilometer away from where they were first introduced 4 years ago. Another farmer who released four species in 2017 has observed a doubling of area where dung beetle activity can be found (2 hectares to 4), with “20 times as many burrows this season so far,” and multiple beetle species at work!

Yet another farmer, who was one of the first to release beetles in the Waikato in early 2016, has recorded plenty of beetles on their farm, with living specimens easily found under cow and sheep dung pats, with 15 holes under some of the dung pats, indicating a large population of established beetles.

On another Waikato dairy farm, where large scale releases occurred in 2018, a visit to look for establishment signs came up empty handed. Underscoring that while biological control has amazing on-going cost-free benefits, they are a living organism that takes time to establish. In the mild North Island climates we expect it to take 2 – 3 years before establishment signs should be expected, and then 9 – 11 years to reach full carry capacity.

These are just some examples indicating the success of beetle dispersal efforts so far. Farms where beetles were introduced nearly a decade ago have now reached such an abundance that they are spreading out across their catchments at a rate of almost 1km a year. This has increased our already high confidence that dung beetles are suitable for New Zealand conditions – indeed, it looks as if they thrive in them!

The sooner you start the sooner you will reach saturation. Of course, if you are prepared to wait for 20-30 years for all the “e” (economic, ecological, environmental) benefits that dung beetles bring, then sit back they may eventually spread to your property. 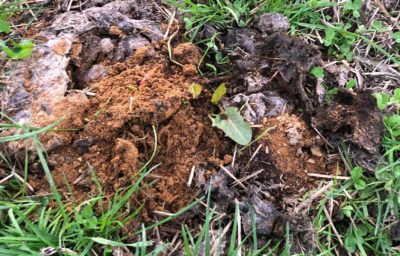 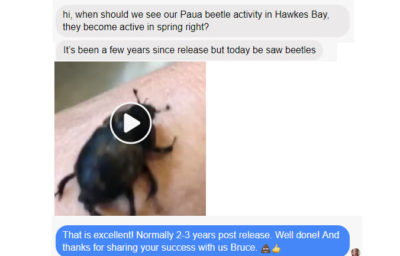